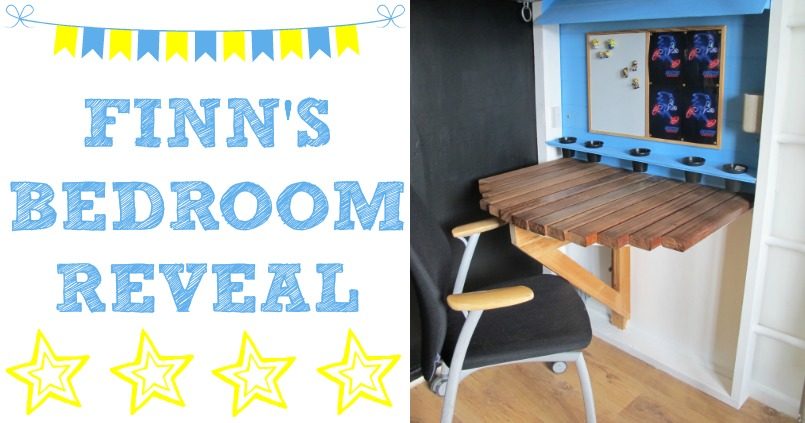 This week 3 years ago we received the keys to our very own first family house and it has been very much a work in process. We of course had the plan to sort the children’s rooms as well as the living room first and then do room by room, well 3 years later (with a lot of breaks in between) Mr. C. has finished Finnster’s bedroom makeover and yes I might be biased but it is pretty awesome and has some very unique features! But of course my vote doesn’t count at all after all its Finn’s bedroom and we hope he loves it as much as we do! 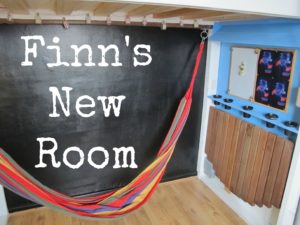 Just a little recap you can read up on the before pictures with lots of ideas thrown into it in my Bedroom Makeover Phase 1 post. Mr. C. started building the bed & desk end of 2017 but there was quite a break in between for the painting job and details like the special features, book shelfs and wall murals. Life and mostly his work just got in the way to finishing it so he restarted it back in January this year so here are some work in progress pictures from the very beginning: 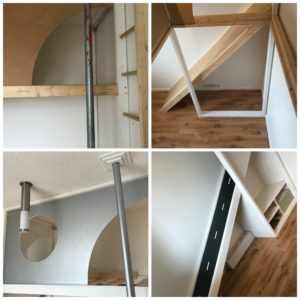 The high bed taking shape with an entrance and exit route as well as the beginning of the slide and a desk plus some stairs and a pole to climb up to the bed. Just before he started the bedroom after the painter got rid of the brown walls I decided I did not like the net curtain in Finns room but due to it being downstairs I wanted something which covers the view from the outside but still lets in the light so I bought some self adhesive decorative window stickers from Amazon which works really well and look how pretty the design is against the wall when its sunny! We now also added some white wooden blinds from Dunelm to darken the room at nighttime. 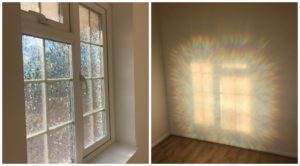 Underneath the High Sleeper Bed Mr. C. build Finn a foldable desk and work station for all his pens with Finn being a little comic artist in the making this is perfect Finns white/pin board got a bit of a makeover with some of his current favourite Sonic being a new background on the inboard side. I also made some magnets out of his ladies ghostbuster figures and minions he use to collect so it can hold all his favourite art work. We added a blackboard paint to the back wall so he can doddle over and over again and of course not to forget his beloved hammock where he loves to read his books in (which can be seen in the first picture above). 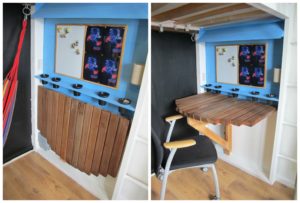 On the left side underneath his high sleeper is shelving for his book collection, his tv which he uses to play on his original Playstation which use to be his Daddy’s back in the day and he has a special section for his Star Wars Memorabilia which some are hand me downs from Mr. C.’s Star Wars days and with him being an electrician he made sure that the books got the best of lighting possible with the push of a button: 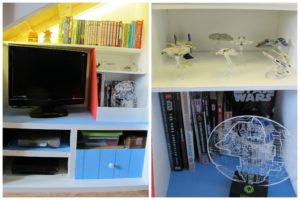 Which leads us (no pun intended) to the very special bookshelf underneath the slide which you can see isn’t that ordinary its Finn secret book nook (with lights inside of course) where he can hide and read some books. It’s his most favourite thing when he shows off his room and perfect for a game of hide and seek! 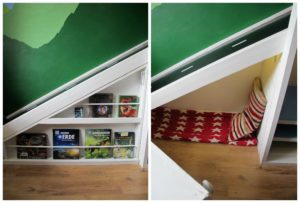 Up the slide (or up the ladder on the other side) is Finns bed where he is greeted by the sun in the morning and by a pretty awesome painted moon and stars wall mural (in glow in the dark paint for the special effect) and underneath the clouds and lightbulbs you guessed it is another light for Finn to turn on if he’s reading a book before bedtime: 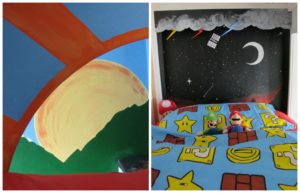 The wall mural goes all the way down the slide and the sun is accompanied by some clouds and pretty mountains. We painted the slide looking like a road and the seat on the top is covered with fabric from an old Back to the Future t-shirt one of Finns favourite films: 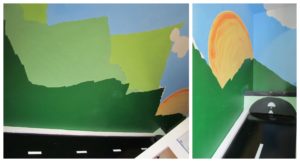 In one of the corners I got a cheap as chips soft toy mesh hammock from eBay for all his soft toys Finn likes to play with one or two of his soft toys for a few months and then switches them so this is the perfect solution to keep them all in place: 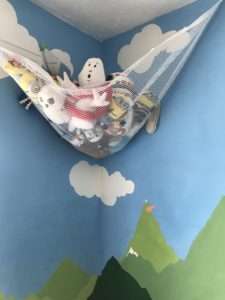 Moving onto another corner in the room Mr. C. build a 3d shelf which looks like a tree. Its main function are the holes around the edging which are meant as clothes hooks for Finns school uniform to be hung up but it also doubles up perfectly for his raptor mask and some more Star Wars Memorabilia. Finn’s wardrobe is made out of 6 boxes which I labeled and the top left one has a laundry hatch for Finn to throw in his used clothes which works pretty well: 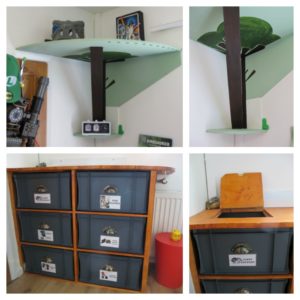 And this concludes Finnster’s brand new room make over! It might have taken quite a few years to get it all finished but it was worth it and Mr. C. did an amazing job! As you can see the room owner approves with a big thumbs up for having the best dad in the world! Now its onto the next job our bedroom which wont be quite as adventures just 4 walls to paint, get a new carpet, buy and build a triple wardrobe and get some pictures on the walls we should have that done in no time (oh so she hopes) right? 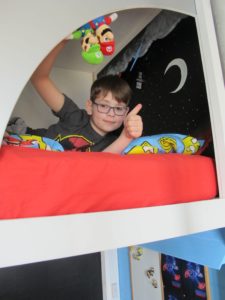 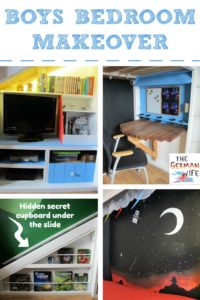