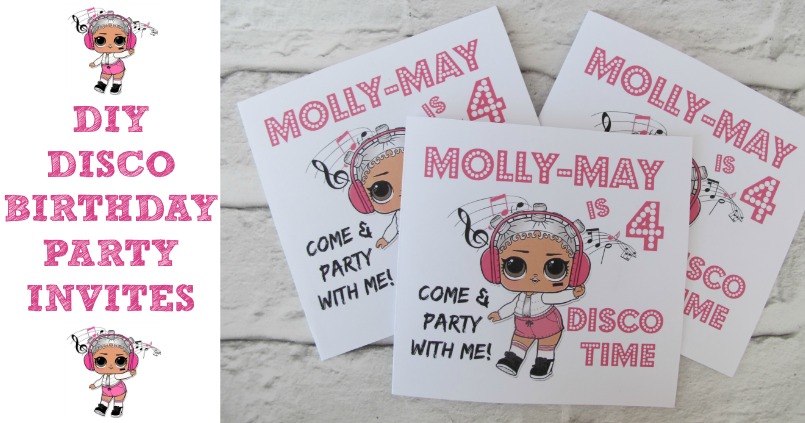 Molly-May loves nothing more than dancing and singing so there was no doubt that we where aiming to find her a birthday party with at least one of those elements covered! Thankfully we did find a “Disco Diva” themed birthday party in one of our local soft play centres and although they had invitations included in the price package I found them to be a little bit plain and there also had some weird request sentence regarding what you have to wear which I found odd so I decided to make my own DIY Invites for her party guests.

Molly-May is a huge L.O.L. Doll fan and there are plenty of pictures of the dolls on the internet and I thought the disco girl with a line of notes fits just perfectly and with help of Picmonkey I had an invitation done up in no time! I used different fonts and colours to make it bright with lots of pink elements using the same shade of pink then the dolls headphones and I think I turned out pretty nice! I used a thicker printer paper to print out the invitations and made some DIY envelopes for them because they did not fit in a normal sized envelope with the square shape to them! 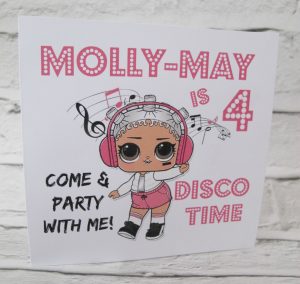 The inside of the invitation had the what, when and RSVP details on it alongside some confetti swirls, a dancing stick man with a hat and notes and some balloons to brighten up the page a little bit: 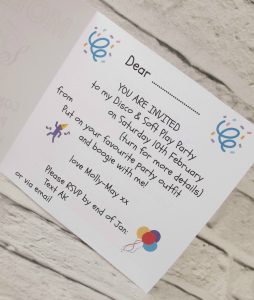 On the back I put the logo of the soft play centre and the address of the place so people will know where to go! You could also easily make some Thank You cards with the same L.O.L. Doll design too which I didn’t get round in doing yet with our busy half term trip to Germany. I might add those on to this post once I have done them!

Have you made your own DIY invitations for your little ones birthday Parties too and if so what was your favourite to make?