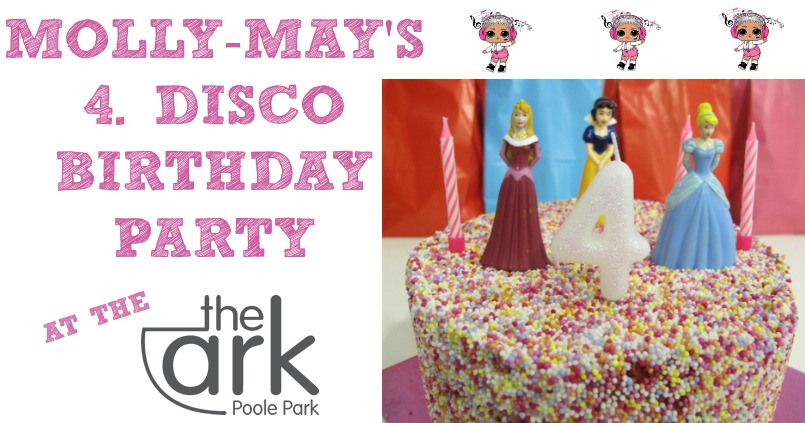 A Birthday Party fit for a Princess that was my aim for our little birthday girl on the weekend of her 4th birthday. We decided to invite 10 of her friends and pre school friends for a little Saturday afternoon Disco and Soft Play Party. Molly-May loves to dance and sing and after a lot of calling around we found the perfect party package at The Ark Poole Park called “Disco Diva” which included glitz, glamour and disco lights and next to a 20 minutes dance session followed by 25 minutes of Soft Play madness there was also warm food & yummy ice-cream for all the party goers, lots of squash and of course some party bags at the end too! Considering we were flying to Germany 2 days after the party this was a fairly stress free few hours of fun for all the kids without having to worry about the tidying up afterwards! 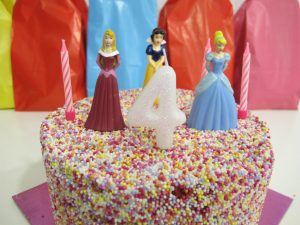 Included in the 90 minute Party (at a cost of £162) we booked at The Ark was a Party Planner to help us with the booking of the party as well as a dedicated Party Host on the day of the party for the whole duration. We had exclusive use of the private party room and 60 minutes for the chosen activity as well as 30 minutes for food. We had a choice between hot or cold food buffet (we choose the hot one so dinner was sorted for everybody that day). We got given Party invites and thank you cards as well as Party bags for all the children and a present for the birthday child. The Ark in Poole Park is a huge building which has its very own Ice Rink (where you can also hold a party!) a cafe next to it and the Soft Play area which also has some table and chairs for the parents to sit down and relax and look out to the park through the open window front on one side of the building! It has a dedicated toddlers’ area – where babies and toddlers have their own specially designed soft play area! The older children (up to 11 years) can go on the other three soft play levels discovering slides, tunnels and interactive zones to run, jump and slide on. The attached cafe to the soft play serves homemade snacks, cake and drinks for big and small costumers. They have some great kids meal deals where you can choose a choice of sandwich, raisins, a chocolate bar, crisps and a drink in a nice animal sandwich box! The Soft Play is not the biggest but just right for a few hours of fun to let out some steam and have some fun with some friends.

When we booked the party (2 weeks before her birthday) at our first visit to The Ark the manager advised us to go with the later time of 3.30pm – 5pm on the Saturday because the Soft Play is still open to public whilst the party is on so it would be less busy. we also got given the party invites who were printed on a A5 sheet of glossy paper. There a nice colourful invites with all the usual fields like To …. I would like to invite you to my party at The Ark Poole Park with Info fields like date time RSVP the address of the venue etc. but in the end I decided to make my own party invites to make them a little bit more special for Molly-May’s guests you can check them out over on my Molly-May’s 4th Disco Birthday Party – DIY Invites post.

The Day before the party I went to The Ark to pay for an extra child which is £13.50 and can be added until 24 hours before the start of the party. I also picked up the party bags because I did my own party bags and put the ones given to me inside mine. The Party bags consisted of a little thin blue plastic backpack with The Ark logo as well as a little yellow bracelet with lots of the animals (whom are also seen on the logo) a notepad and a pen. I think there are great little party bags and very useful instead of those plastic bag ones you normally get with 2-3 tiny and cheap plastic toys inside who break after one use! My kids love writing and drawing inside a notepad when we are at a restaurant or pub so I think there very handy to have! If you want to have a look at my homemade party bags and some pictures check out my Molly-May’s 4th Disco Birthday Party – Decorations & Party Bag post. 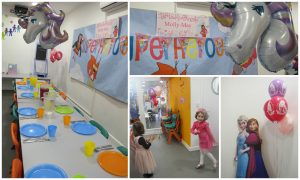 On the Day of the party we arrived just after 3pm (I asked the day before and they told me there was a party beforehand so we can get into the room 15min before our party) and we started to decorate the party room and our party host introduced herself to us. She played some music from her phone via the speakers so the children could have a little bit of a boogie. Unfortunately they decided to run around the  table and one of the girls manage to trip over. The long party table with all the plates and cups set up already was a bit of an obstacle and the children didn’t have a lot of space to dance which was a shame. At the end of the room there was 4 stacks of spare chairs which might have just been an ideal extra space. I think If I would have arrived earlier I would have asked the party host to remove them to make more space because the party room itself isn’t the biggest. Another thing which I did not spot until after the party was that the big banner inside the room (which was blue and read superhero’s with lots of animals on it) could have been exchanged for a pink version which would have fitted in nicer with our pink princess decorations. I did remove a Marvel Superhero banner which was hung up from a different party and ask the party host to bring in the cardboard cut out of Anna & Elsa which I spotted in the corner of the closed up Ice Cream Area. Although it was nice to have a dedicated party host for the duration of our party unfortunately there where a few hiccups with her. When it came close to the time where the children are meant to sit down for their hot food instead of calling them out over the speaker she decided to dish up the food first and then call them it, unfortunately that meant that some of the food was lukewarm by the time the kids actually sat down to eat. At one time we could not find her anywhere and we had to ask another staff member twice if he could see where she is, another time when we asked for a knife to cut the cake as well as some napkins she did take quite some time to get those for us and it was towards the end when everybody wanted to leave which wasn’t ideal. She also told us 10 minutes towards the end of our party that there will be another party straight after which they had to set up for which she was only informed about herself 5 minutes prior.  I just felt like even though there was a lot of staff in the premises everything was a little bit unorganised. Thankfully the children weren’t aware of any of that and had a right blast dancing and running wild at the soft play area!

Another thing which I only noticed a week later when I wanted to write out some thank you notes to all the children who came to the party was that I did not receive any thank you cards from The Ark Team (which I think would have been handy to be given out together with the invitations). Yes I did not ask for them after the party but surely its down to the Party host to hand them to me afterwards or make me aware that I can collect them from the till after the party? Also whilst writing this and listing all the things you receive in the package we have chosen for Molly-May we also did not get a present for her. I don’t want to sound ungrateful and believe me she got plenty of presents and is a very luck girl but if the service is offered and its included then the venue should make sure that it is delivered before or after the party.

Overall I would recommend The Ark as a Soft Play Centre because I think the staff ratio is good, the food is nice and the place is clean so we will defiantly be returning as costumers for the kids to have some fun times but I don’t think I would book another party for my children again. Maybe I just caught the team on a very busy day and that’s why some things didn’t turn out as planned or took some more time but if I pay for a party somebody to host my daughter’s birthday party I expect the service to be delivered and I just didn’t feel it was a 100% in our case.