Today I bring you the Boys Christmas Gift Guide for ages 8 and over. With Finn turning 8 soon I do feel its getting harder to buy for him every year whilst trying to stay in some kind of reasonable budget. I am trying to think quality and long lastingness over quantity when it comes to his presents. I have put together a few of the ‘most wanted’ items on his wish list this year. But knowing him his list (and my guide) will probably grow within the next couple of weeks because there is a lot of great present choices out there this year:

Finn just like any other kid his age is madly into Lego and even though he has some rather large Lego Sets he loves to play with his Mini Figures a lot too. The Lego BrickHeadz construction characters who are over 2″ tall (7cm) are a brand new way to collect, build and display iconic characters from your favorite movies, TV series, games and comics. The Iron Man BrickHeadz character is fun to build using colorful LEGO System bricks that recreate all of his iconic details, including red and yellow suit of armor decoration. He stands on a buildable baseplate with series number and BrickHeadz icon for easy display! The iconic Captain America BrickHeadz character (which is his Daddy’s favourite Super Hero) includes his detailed costume with headgear.and his all important shield in his hand. And just like any other Lego you can be as creative as you want with mashing up your characters to create super cool hybrids or your own amazing characters. Lego are also adding to their BrickHeadz Collection with 2 new characters from the Lego Ninjago Movie: Lloyd and Wu which suppose to be released by November 2017 in the UK. 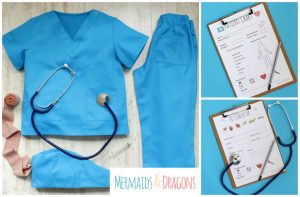 This brand new Irish company Mermaids & Dragons has designed the most amazingly detailed fancy dress costumes for children age 3 to 8 years to make children’s role play as much fun and realistic as possible. An all- time favourite role play activity for kids is Doctors and Vets. Whether your little one is learning about their five senses or they are examining Teddy for a rare disease these high quality kid’s scrubs will inspire them to keep the game going. You can even download a free printable Patient Chart & a Vet Role Play Set to document your human or animal patients progress. The Costume is handmade from hard-wearing mid weight cotton drill and features 2 front pockets on the top and a back pocket on the bottoms. It has a elasticated waist for easy fit is safety tested and CE marked. What I love about the Scrub Set is the love for detail and the quality of it. The 3 piece set which comes with trousers, top and a  hat and looks so much like the “real deal” and its made out of very doable and hard-wearing material which can be washed and tumble dried. It wont itch or scratch like other cheaply made polyester fancy dress this will be a costume which will last for a very long time to give hours and hours of fun role play! I kind of wish they would do it in Adult Sizes too because it’s that kind of costume I want to wear too! 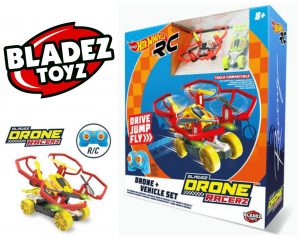 We recently tried out the 3 in 1 Drone Racerz Set from Hot Wheels and I think it’s the perfect starter Drone for any 8+ year old child who has a passion for flying, racing and doing stunts with this amazing multitasking Drone. It might take a while for your child to get to grips with the flying part of the Drone but its all about patience and practice which makes you the perfect Drone Racer! You can read more about the Hot Wheels RC Drone Racerz in my review. 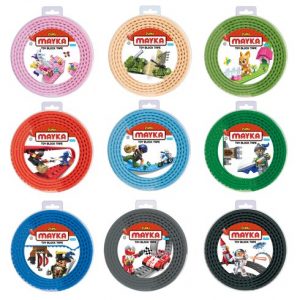 Now this is something Finn has been after for a while he loves building spaceships and creates his own mini figure characters from tv shows or movies he watched so the Mayka Tape would make his lego building extra adventures with all the possibilities this tape brings with it! The Mayka Toy Block Tape instantly transforms virtually any surface into a base for toy building blocks, figures and accessories. Build around corners, up walls and on all your favourite objects! Simply cut, shape, and then stick your toy block tape anywhere! Each roll has 2m/6.5ft of reusable tape that’s compatible with all leading toy brick brands. The block tape is 100% compatible with Lego and there are 9 colours available. The tape is made out of non toxic silicon and it isn’t recommended to be used on painted surfaces. 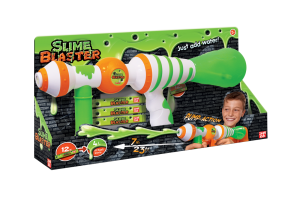 If you have been following my blog for a while you might have spotted that Finn has become a huge Ghostbusters Fan and I was over the moon when I won this Slime Blaster Gun in a Raffle at #BlogonXmas! I am not sure if it was a very stupid move considering the ammunition of this gun is actual slime but I know it will make my son very happy and we can always compromise that this will be used as an outdoor toy only, right?? Instead of just spraying water, the Slime Blaster turns water fights into a gooey, oozy adventure where your opponent will be blasted with slime. It is also easy to use: screw open the rear of the Slime Blaster, fill the tank with green powder, add 400ml of water and wait for approx. 2 minutes. Shake well and then it is slime blasting time. The 42cm long pump action gun can fire slime up to 7 metres and its suitable children aged 3 years and over. Wish me luck!!!

What is on your Boys Christmas List this year? Both of my children watch mostly Netflix and DVD’s so in a way I am kind of glad they don’t get influenced too much by tv advertising and mostly like stuff they have seen at their friends houses or in a shop (can’t walk past any toy aisle in the supermarket without quickly having a look nowadays!)

Disclaimer: Please note that some of the items marked with a * have been send to me for the purpose of this Christmas Gift Guide, but all thoughts and opinions are my own. 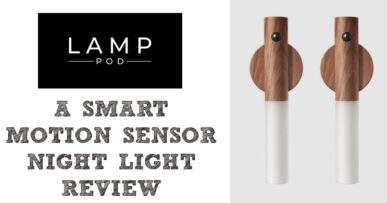