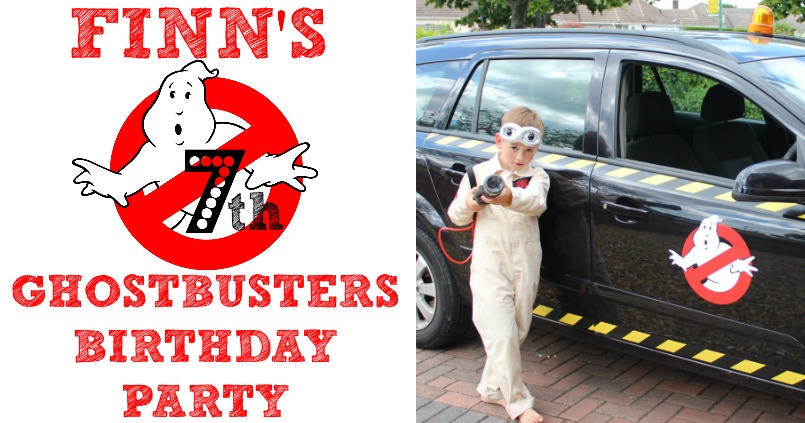 Finn is absolutely obsessed with Ghostbusters at the minute, he even got his 5 new best mates in school singing the movie tune at pick up time (and probably every break time they get)! So it was a no brainer that he asked us for a ghostbusters themed party with all his new and old friends in our new back garden which luckily is big enough to house 18 children chasing some ghosts (yes I must be mad agreeing to that!!)

Because we decided on the theme and the date of the party rather short notice with only a few weeks to spare I went onto Ebay to purchase some Ghostbusters Invitations from wee-ideas which is £3.99 for 8 4x6inch invitation there are printed on rather thin paper which I wasn’t too fussed about after all they get put on the fridge and thrown away after the party has been: 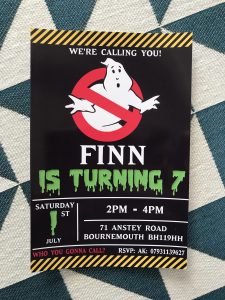 Like previous birthday parties I have thrown for him over the years I have looked on Pinterest for inspiration to make bits and pieces DIY style like ghostbusters inspired food, the party bags as well as games but one thing you can’t find there are the party supplies but thankfully Party Delights came to my rescue and kitted me out with their lime green tableware and decorations which where just perfect for my Slimer inspired party table & buffet. I mixed it up with some chevron napkins and some cups to use for the slimey (apple) jelly which was a big hit: 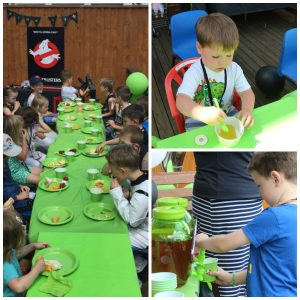 Party Delights not only have a large range of colour themes they also have lots of popular children and adult themed party themes as well as baby, wedding, personalised and even disney themes. And you can also find plenty of fancy dress for every occasion (I was very tempted to get the Slimer Outfit for Mr. C. to wear!) There is something for everyone and their tag line “One Stop Party Shop” is more than accurate! You can check out their whole range over on their Party Delights website.

As much as I love baking when it comes to the kid’s birthday cakes I always leave that to the professional and thanks to Kara’s recommendation her Baker Michelle from Sculpted Bakes worked her magic and made the coolest and yummiest chocolate filled Ghostbusters cake for the birthday boy alongside some yummy vanilla cupcakes who were not only topped with green icing and slime but also had a slimy surprise filling. I bought the edible paper cupcake toppers with the GB logo off Ebay to add-on top of the cakes shortly before the guest arrived. I always feel its such a pain to cut a piece of cake wrap it into a napkin and then add it to the party bags so I bought some single paper cupcake containers (once again for Ebay) to give each guest a cupcake at the end of the party to enjoy at home! I was lucky enough to have some help from my lovely friend Justine who arrived all the way from Bucks at 10am in the morning to help me set up and most importantly blow up all the balloons AND do the whole of the food buffet! She also made those cute little fruity ghost skewers (I used some edible pens to draw the eyes on) who were a hit with the kids! I decorated not only my cake plate with some slime made out of cardboard paper and I purchased 2 green plastic drink dispensers for the kids drinks (which where £4.99 at Home Bargains!) and decorated them with the GB Logo: 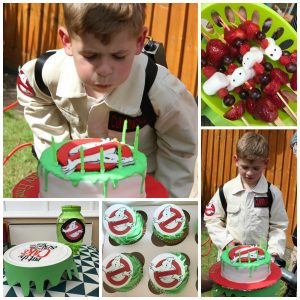 I am rather chuffed with my “The Party’s here!” Sign which I copied off a Pintrest and I also took lots of other ideas from their to create the party bags which consisted of some plain black paper bags decorated with the GB Logo and I made a personalised slimer tag for the boys and a stay puft marshmallow man tag for the girls which was filled with a little bag of special stay puft marshmallows a plastic container filled with ectoplasm slime a lollipop ghost, some GB chocolates, a GB logo sticker, a green glowstick (so hunting the ghosts in the dark is easier) as well as some little party bag favour gifts ranging from jumping frogs to cars and bracelets depending on the age of the kids: 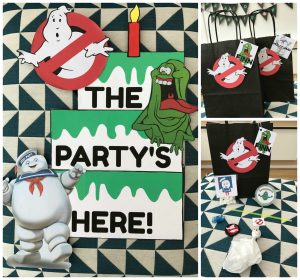 I also made 2 buntings which spelled the famous tag line of the movie ” I ain’t afraid of no ghost” to hang up in the garden (I bought some plain black bunting from Ebay and cut out the letters and logo’s to be added on) and bought some personalised Ghostbuster themed banners off Ebay. Our trusted Little Tikes House had the perfect colour to be called the GB headquarters for the day and I made a large “Who You Gonna Call?” Sign out of paper cardboard, cardboard an old hula hoop ring and lots of tape for the kids to use as a prop (you can check out my follow-up post with it in action!). We hang up lots of lime green party balloons from Party Delighs who also send me some balloon plastic hangers who are reusable hangers to have a bunch of balloons securely attached to the hanger with a little hook which made it perfect to just hang them up on our washing line: 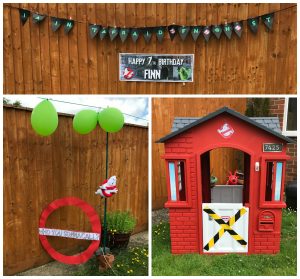 To top it off I made each little party guest there very own personalised proton permit I.D. to wear at the party (the lanyard and plastic I.D. slips are from Ebay again): 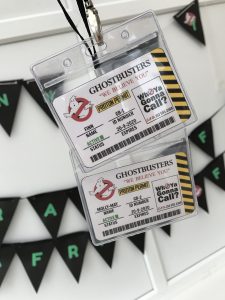 If you want to read more about the party and check out the games and some very special guests who visited come back tomorrow for another post with some more ghostbusters fun!

Disclaimer: I have been sent some lime green party wear and decoration from Party Delights for reviewing purposes, but all thoughts and opinions are mine.

This website uses cookies to improve your experience while you navigate through the website. Out of these, the cookies that are categorized as necessary are stored on your browser as they are essential for the working of basic functionalities of the website. We also use third-party cookies that help us analyze and understand how you use this website. These cookies will be stored in your browser only with your consent. You also have the option to opt-out of these cookies. But opting out of some of these cookies may affect your browsing experience.
Necessary Always Enabled

Any cookies that may not be particularly necessary for the website to function and is used specifically to collect user personal data via analytics, ads, other embedded contents are termed as non-necessary cookies. It is mandatory to procure user consent prior to running these cookies on your website.