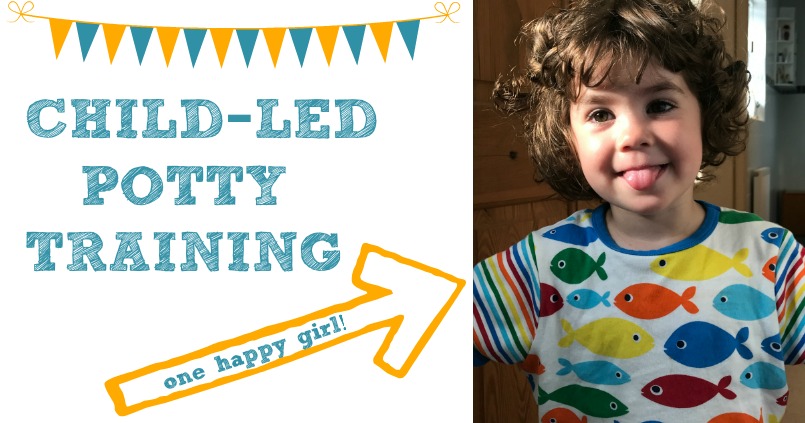 With nearly 3.5 years Molly-May is on the ‘late’ site of Potty Training but to be honest there is no right and wrong when it comes to what age your child should be potty trained. Having worked in the Nanny Industry for over 10 years before I became a Mum myself I have seen it all. From the Gina Ford Theory (Potty Training in 3 days) to lots of failed attempts because of pushy parents wanting to have their children out of the nappies right after their 2. birthday to twins who were a challenge because one was just not ready yet where’s the other one was happy to start potty training!

With Finn I approached the subject shortly after his 3rd birthday when it was the height of the summer and I let him run around naked most of the time. I think it took about 1-2 weeks until he was potty trained but another few month until the occasional accidents stopped. Night time was a very different matter, we kind of thought we let him decide when its time to lose the night-time nappy but that moment never came so after a little push from friends telling us that we should just give it a go so we took him to bed without a nappy and woke him up around 10/11pm to go to toilet again (mostly he was still half asleep and we carried him to the toilet bless him) but eventually he took himself to the toilet and that was it!

Back in Summer 2016 when Molly-May was 2.5 years she kind of showed interest in her potty which led me to the assumption that she might be ready so we gave it a go but it only lasted a week before she point-blank refused to use the potty (and she wouldn’t go near a toilet at all) then they went to my Mum & Dad’s in Germany for a holiday on their own and she was mostly running around naked using the potty or the toilet (with a potty training seat) for wee wee’s (never for Nr. 2’s) but that stopped again as soon as we got home! It did not help that she was on medication (Cosmocol) for an ongoing bowel problem which is very common for 2-3 year olds which made her number two’s very runny! Without the medication she had real problems even pushing anything out and if then they where rabbit like hard pebble poo (sorry for the TMI). I first started off with one of those cheap 5£ supermarket toilet training seats which where pretty useless because the toilet opening was too big so the seat was just sliding around when she tried to use it so she got frustrated with it. So I went and bought the Flexi Fit Toilet Trainer Seat from Pourty which is pretty nifty with its adjustable prongs which give a great secure fit on any size toilet seat (so its pretty handy to travel with if visiting family/friends overnight) but unfortunately MM did not get on with the seat either so most of the time it decorated the side of the toilet in our bathroom. I have to admit I was debating for a while if I shall buy it because with £14.95 it is a bit on the higher price range when it comes to a toilet trainer seat but I thought the flexi fit and the reviews I have read seem to make it worth while it was only my fussy daughter who decided it wasn’t! We also bought the Pourty Potty which was more of a hit (guessing because I bought it in her favourite colour!) I really like it because it pours out of the back so there is no messy emptying and it also has a high splash guard and a wider seat then average potty’s and it’s quite reasonable priced at £9.99: 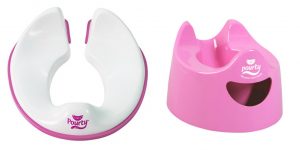 Before we relocated to Bournemouth on Easter we visited the kids potential new school and in the paperwork we found the sentence “Must be Potty Trained to be accepted into Pre School” after a chat with MM’s lovely new Teacher we agreed due to her medical condition we can take our time regarding getting her out of nappies which was a huge relive because I just wanted Molly-May to do it in her own pace. That doesn’t mean I slightly guided and encouraged her to have plenty of nappy free time when we where at home and coincidently the week when I started to slowly wean her off her once a day sachet of Cosmocol (first down to every second day and after 5 weeks I stopped it completely) she started showing an interest in wearing her big girl knickers instead of the pull ups she used till now. 2 weeks ago I decided it was time to try her wearing no nappy anymore at pre school and so far (touch wood) we haven’t had a single accident. Its pretty astonishing actually because I do not need to reminder her at all (although I still use the line go to the toilet before we head out the door!) she just goes up to the toilet by herself and only shouts for me when she has done a poo. During the hot days we had she mostly used her Poutry Potty (see image above) in the garden in-between jumping in and out of the pool but when we are indoors we bought this pretty simple but very affected “Family Seat” from Screwfix it costs £19.99 but it is actually a very solid and a good quality toilet seat with the extra kid seat build in which also has a very handy magnet on the top so it wont fall on your back when you fold it up, it also has a soft close option! 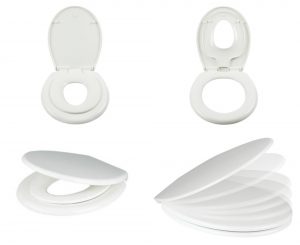 I thought I also mention the “Reward Scheme” we have had going on. With Finn it was 1 smarties for wee wee and 2 smarties for number 2. With Molly-May I did not have to encourage her to go to do a wee so I did not mention any rewards to her but I did say if she does a poo in the potty or the toilet she can have an easter egg (yes we are still not finish eating them!) and once the easter eggs are all gone i probably will either stop or move on to 1-2 smarties. The only downside with 2 children is that the eldest now demands some of his choc too as soon as she happily tells me that she has done a poo!

So now that we have mastered Potty Training and instead of nappies I now carry spare knickers, clothes and my very tried & trusted 2 in 1 Potette Travel Potty (which I used for years with my charges and now bought again for both of my kids) which fold super small and comes in its own bag. You use disposable Nappy bags which have a funny umbrella holding frog mat in the inside and is attached to the left and right side of the curved legs. The legs fold in to fold it up and store in your bag or out to be used on a public toilet if needed. It found Mothercare have the cheapest price at the market for it with £15 and the liner are £10.25 which is pretty expensive I agree so you could just make your own with some small bin liners and a cheap ultra absorbing panty liner works just as well! 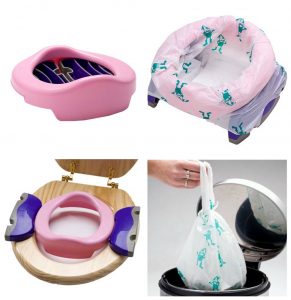 I have to be honest I never thought that our Potty Training Journey will be that relaxed and straight forward but because Molly-May decided to do it all by herself in her own time (they always say girls are normally harder to potty train then boys!) it was quite a nice surprise and very much-needed after the turbulent start of the year so far! But that isn’t the whole story last but not least about 5 days ago she point-blank refused to let me out a pull up on her at bed time telling me: “I am a big girl now I don’t need any nappies anymore mummy!” and me already dreading the wake up calls because of a wet bed but hey what is a mum to do when the child has such a strong head! And once again she surprised us with staying completely dry (I do make sure she doesn’t drink anything 30-60 minutes before bedtime and uses the toilet before she goes to sleep) long may it continue!! I now have one very happy “big girl” who loves telling everybody who wants to hear it that she now is a big girl because she has knickers on: 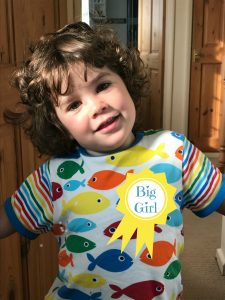 What age did you potty train your child? If you have more than one child did you see a difference in boys vs girls when it comes to the potty training process? I would love to hear your stories! And if you just about to embark on the scary road of potty training try to keep an open mind and don’t force it! Age is just a number nothing more your child will tell you when its ready for it (with some light encouragement!)