How did I come up with  “The German Wife”? 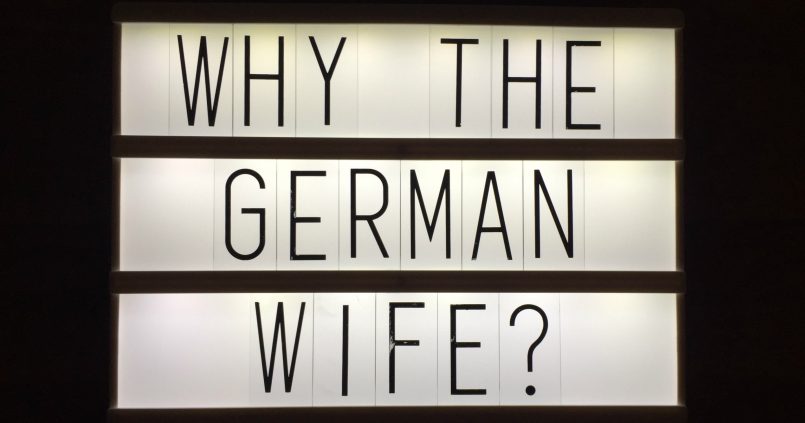 Now some of you might think oh thats an easy question to answer its because she married a english man so she is his german wife, well thats not entirely true (except the fact that I am indeed a German wife now)!

When Mr. C. and me started dating well over 10 years ago he was trying hard to impress me with his (non existent german knowledge and decided every time he said my full name (which is Anne-Kathrin) to say it the German way and obviously he got it horribly wrong so much so that I started to get rather frustrated and rolled my eyes every time he attempted it again….

So thats how AK was born he decided to just shortened up my name (quite drastically) and sometimes when he was in his jokey mood he added the number 45 onto it or even introduced me to his friends as AJ (and they took quite a while to realize that this actually wasn’t my name even though Mr. C. told them so (they should have really know better after all they knew home way longer and better then I did back then).

So once the number and AJ saga’s came to an end and I finally met all of his rather large group of friends he decided to play on a new tacking targeting the people at parties we went to who didn’t know him or me yet.

After he said his name and shook hands he then put his arms around me and introduced me into the rounds as:

“Have you met my German wife AK yet?” (back then it was Girlfriend and eventually Fiancee of course)

It defiantly always brings laughter and its a pretty funny conversation starter into it so by now I am pretty use to it and even sometimes steal his thunder by introducing myself as “Hy I am AK I am Mr. C.’s German wife” if I feel like it.

So there you have it, out of a party joke came a brand new blog name which hopefully will bring a exiting new project for my writing adventures!

Knowing I wanted to (finally!) record the rest of my wedding planning as well as all our travels and adventures and much more I decided to add some poignant pieces into my new blog banner to show my new and old readers what they can find on my new blog.

I hope you like my new name and design as much as I do and enjoy reading my blog!