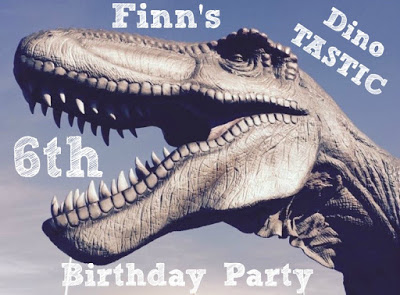 The day before we went on our holiday we celebrated Finn’s 6th Birthday once again.

This time with all of his best mates and friends from school.

and mainly celebrated with family and close friends.

But with him being in school for the last 3 years and having been invited to plenty of amazing birthday parties which where held at Farms, Indoor Trampoline Centres, Bowling Alleys,

Gym’s and plenty of more cool places we decided this year he can choose his very own big party which we will throw him after all this might be his last birthday here in this area,

before we move next year!

Hes been going to Dinosaur Escape Adventure Golf for a quite a while now. well mostly Daddy took him there so the dedication was made pretty quickly to hold his party with his 10 friends there.

fantastic features from the dinosaur era: 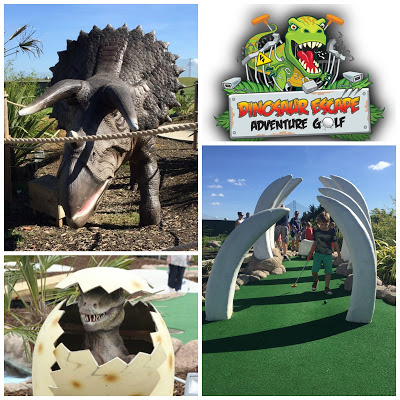 We got a Birthday Package Deal which included the invites, a round of Mini Golf,

1 hour use of the dinosaur themed party room, party food, ice-cream and drinks for the children

as well as a certificate and a dinosaur party box.

I was happy that the food part was taken away from me because that’s just added on stress, after all i have been throwing birthday parties on mass even before the children where born when i use to work as a Nanny, it was fun but utterly exhausting organising it all especially with me decided to book it so close to us heading off on our family holiday (what was i thinking!)

kids party bags because it was such a cool idea! So here are some instructions how to make

your very own “Thanks for stomping by!” party favours:
. 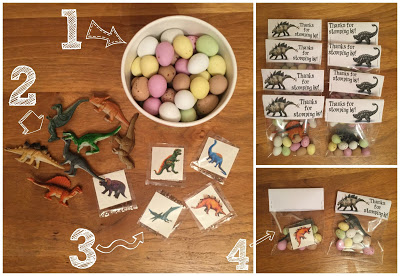 .
You need some:
1. “Dinosaur Eggs” aka chocolate mini speckled eggs you can get them in any supermarket i got them from the pick’n’mix station at my local one just make sure you take a few extra (i got a large tub) just in case some off them are broken.
2. Tiny little dinosaurs (which you can pick up at ebay in a 12 pack quite cheap).
3. temporary dinosaur tattoos (because who doesn’t like tattoos right?)
i picked them up in a pack of 24 from amazon.
4. small clear plastic bags (forgot to take a picture of them individually)
which can be bought off ebay for a few quid!
Add the eggs 1 dino per package and 1 tattoo into the clear bag and use a stapler to attache
your “Thank you for stomping by!” label onto the bags.
I created them with a image of 2 different dinosaurs (found on google images) and edited
on Picmonkey with the ‘Coollock Black’ font (which is a premium one so you have to
have an account but there are also many free ones to choose from).
And voila there you have some supercool hatched egg dino party favour bags with a
added thank you note for attending the party.
The Sun came out and we had a fantastic hour with all the kids playing or attempting at least
to get those balls into the holes although a few went into the stream which promptly made
– especially the boys – giggle hysterically!!
In honour of her brothers dinosaur party i found this supercute dress covered in dinos from next (at a bargain price on ebay because it was last seasons) for Molly-May to wear:
. 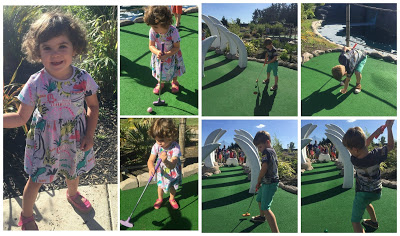 Me being be I forgot the balloons but hey i had a dinosaur happy birthday banner a few stand up table  decorations and we had a supercool orange triceratops pinjata so that kind of let Finn & all the other kids forget about the missing balloons! Although the pinjata game didn’t go to plan at all!

Little Tip make sure you cut a few holes into the side and bottom of the pinjata it took the children plus a few adult way too many attempts to hit it open! But once it finally ‘exploded” the sweets plus some (medium sized) Dinosaurs (which i picked up from a bucket set for 4.99£ from B&M)

went down a storm with all the party goers!

And then there was the cake (you can’t have a party without one right??)

I thankfully found a mum from Finn’s school to bake me a small cake which she surrounded with choc sticks and covered in (icing) grass and added a 3d scene with edible rice paper dinosaurs (who i bought off ebay and then single handed cut out one by one oh the joys!! Next time i pay some extra few quid to not do that again!!). She also baked a lot of cupcakes with some white and green icing where i stuck lots of different edible dino rice paper on top.

I packed them all in little cupcake boxes ready for the kids to take home together with their party bag.

(Btw. i found the the orange triceratops on amazon)

Despite the pinjata mishap, the forgotten balloons and the room being very very echoey it was the perfect dinoTASTIC birthday for our now 6 year old Finnster!! 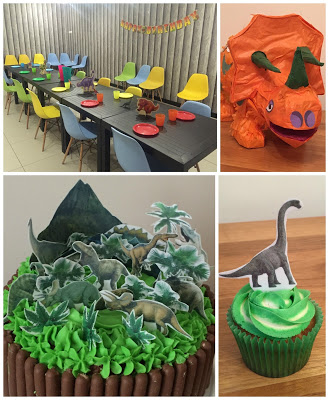 And last but not least there was the matter of writing little Thank you notes to all of his mates and friends who where kind enough to bring him some presents along: 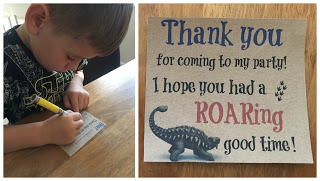 Once again i made them with help of picmonkey and printed them on a bit of a thicker brown paper.
Here is a draft which i pinned for you on my Pintrest in case you would like to use it: 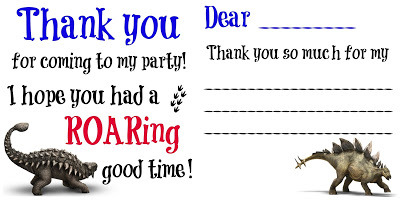