Check out the all new Sea-Slimed Octopod Playset!

Its always exiting when there is a new Octonauts Toy coming on the market especially
when you have a Octonauts mad son (followed slowly by his little sister) in the house!
We where lucky enough to try it out for ourselves just how cool the new Sea-Slimed Octopod is and let you know the results!

Here is a little bit of info about the new Slime Octopod:
It’s slime time with this Octonauts Octopod Slime Playset! The Octonauts find themselves in a sticky situation when the Octopod becomes mysteriously covered in slime! Press the Octopod’s mouth to see its translucent tentacles light up and glow a cool slime-green color and to hear phrases from the crew. Make a quick exit out of the Octopod using the Octo-hatch in the Launch Bay or search the Octopod for the missing octopus—could he be hiding in Barnacles’ or Kwazii’s quarters or maybe he’s escaped to the Garden Pod? The Sea-Slimed Octopod Playset comes with Barnacles in his slime-green Octo-suit, a rescue net, a slimed octopus, a slime catapult and a container of extra gooey slime!
What we thought about it (+ some comparising pictures with the 1st generation Octopod): 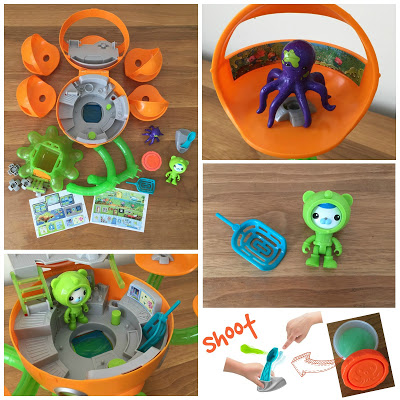 Building the new Octopod took less then 10 minutes and was pretty simple, you might want to turn off the Octonauts Alarm on the bottom of the pod because i jumped when i accidentally pushed it whilst assembling the parts! The Octopod comes with a Octopus Captain Barnacles in a very green Slime suit and a large scooper as well as a little pot of extra slimy slime which can be used
on the catapult to shoot some slime! 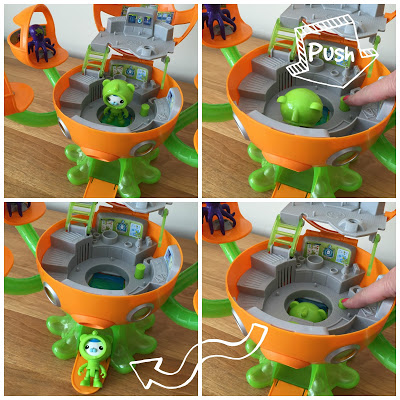 The new Sea-Slimed Octopod has got some pretty cool features which includes a Octonauts Alarm button inside to Octopod which gives out different sounds and phrases from Captain Barnacles like:
“Sound the OctoAlert” – “Octonauts, to your stations!” – Octonauts, activate the sea slide!”
“Its time to slime” – “Octonauts, good work!”

If you stand Captain Barnacles on the slimy OctoHatch and push the green button next to it he will slide down the legs ready to head out of the Octopod to get quickly onto his next rescue mission!
The coolest feature has to be when pushing the pod’s mouth because it will light up and glow a pretty fantastic slimy bright green colour! And all 4 Pods rotated 360 degrees which is super! 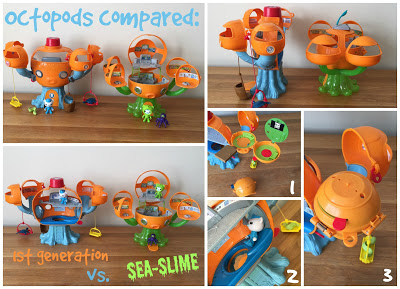 The 1st generation Octopod comes with over 10 play pieces (not all shown on the pic because we lost a few over the years). It has a red OctoAlert button on the top which has sounds and phrases and
can be removed and clipped onto trousers. You can launch the Gup A from the base of the Octopod and the Octonauts can slide from their Pods into the middle and down the OctoHatch and out of
the Octopod for their next mission. You can also buy some extra add on: “On The Go Pods”
which are the sleeping quarters of the 4 Octonauts as shown in picture 1 and 3 they can stay
open or close up and attach to the arms of the Octopod.
The old style Octopod is taller and wider then the new one and even though
both have similar cool features i do prefer the new one!

This brand new Sea-Slimed Octopod will make the perfect Christmas Present for any Octonauts Fan and you can get the Slimed Octopod for you just £39.99 from your local Smyths Toy Superstore.

Disclaimer: I have been sent the Octonauts Octopod Sea-Slime Playset for reviewing purposes,
but all thoughts and opinions are mine.