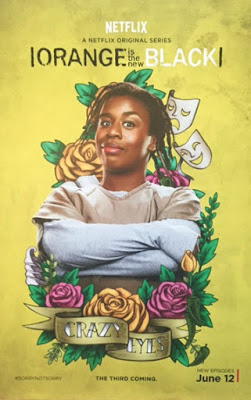 I was rather exited when i received a very orangey invitation this week in my inbox.

No other then Netflix asked me to join them at the Orange Is The New Black Season 3 Launch.

So on Thursday i stepped foot into the very own London version of  Litchfield Federal P. who just happen to hold some special Visiting Hours at The Tardis in Waterloo.

I was greeted by the lovely Netflix Team and after having my Mugshot taken i ventured to the Bar where a delicious and fruity Pimms was calling my name! 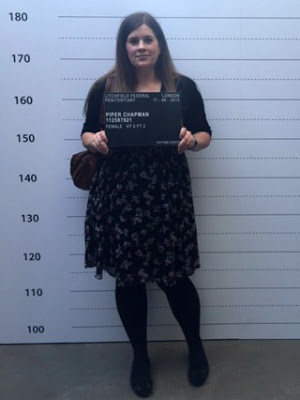 Then I headed to the Benefit Make up Stand to get beautified for a very natural “Piper” look and after tucking into some delicious miniature prison food like prison porridge served in a sardine tin (which turned out to be rather nice risotto with veggies) and a beetroot lipstick.

Now i wish i took some pictures of the gorgeous drinks and food as well as my make up after the Benefit Lady worked her magic on me but i was just too busy enjoying myself!

Netflix Stream teamers! Later on we took our places for a exclusive preview of the first

2 episodes and they certainly did deliver!

I loved it and cant wait to get sucked back into #OITNB binge watching very soon!! I loved the first

2  seasons and Nicky is one of my favourite characters.

I won’t give you any spoilers but its brilliant and defiantly worth loosing sleep over because you cant stop after just 1 episode even though its way past midnight already, am i right??

On the way out we couldn’t help but have a group mugshot together!

We make quite a good bunch of inmates don’t you think??

The only thing missing where those orange jumpsuits! 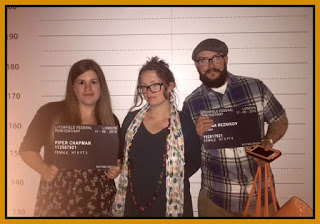 Moi, Lauren (Mummy Is A Gadget Geek) and Pauly (Gifts from the Pirates) who brought along his awesome OITNB Phone Cover which you HAVE to check out here!

Making sure that we can bring some orange colour back home Netflix gave us those awesome Goodie bags consisting of a Litchfield Jumper (which kept me warm on my delayed train journey home!) some pants, a yoga mat, a notebook, voucher, some Benefit goodies and hey can you see its

THE chicken!! which unfortunately was beheaded from Molly-May

seconds after this picture was taken!! 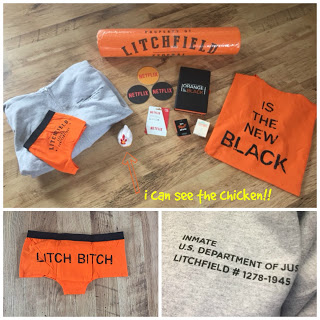 I don’t think anybody needs much convincing if you loved Season 1 and 2 then get onto Netflix now and enjoy the brand new 14 Episodes of prison life, early releases and new dramas in

Disclaimer: As part of being on the Netflix Stream Team i have was invited to the #OITNB Season 3 Launch in London but i have not been asked to write about my evening

and all thoughts and opinions are my own.