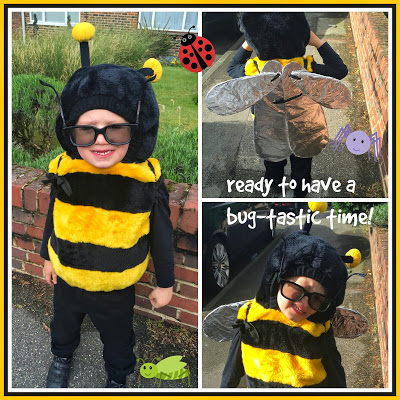 I love Finns School they do so much fun stuff for the kids. Well maybe its normal but this is my first year as school mummy so everything is new and exiting (and sometimes a bit overwhelming!)

So last week Finn’s Class had a Bug Party and after asking Finisher what he would like to dress up as (and looking forward to another home made fancy dress from Mr. C.)

he decided on a Wasp because his words: “they can sting”!

So off i went to his fancy dress box and was delighted to find a Bee costume in there so Daddy created some special wings & some wasps glasses to transform it:

He had a great time at the party next to all the Ladybirds, fairies

and other bug creatures!