You have my Hand, my Heart and my Soul!

Engagement Family Life Wedding
I was pretty non traditional when it came to engagement rings and I told Mr. C. that I rather choose my own so off I went to scroll the internet and manage to find the perfect one, purchased with his credit card and safely delivered the waiting began! He told me he wanted to do it in a special way and knowing him I thought this might take a while if there is planning involved….he´s one of those who want to get it right.
About 4 months later Mr. C. came to Germany to join Finn and me on the last week of our Summer Holiday in Bavaria. He already told me before we left for Germany that he wanted to ask my parents for my hand of marriage and I knew he was pretty nervous about it. But NOTHING prepared me what he had actually planned for me that weekend.
After asking my parents Friday evening and even telling me that night what they talked about in detail (well I thought he told me everything how wrong was I) my Mum and Dad had an Arts and Crafts Fair at the front of their house the following day and due to my Brother and his Girlfriend visiting we decided once the fair is over we will all go together to the local Folks Festival (also know as the beer festival). I have been going there since I was little and Mr. C. and I visited the Beer festival together now for the 5th year running somehow our holiday is always falling around this September week ;o)
I knew he also wanted to ask my Nan as well as my Godparents (who are like a 3rd set of Grandparents to me) so I didn’t think a lot about him still being nervous that Saturday throughout the day.
The evening came and we all put on our traditional Bavarian Dirndl & Lederhosen and off we went into town (my Brother, his Girlfriend and Mr. C. already left a few hours earlier to meet up for dinner with my Godparents): 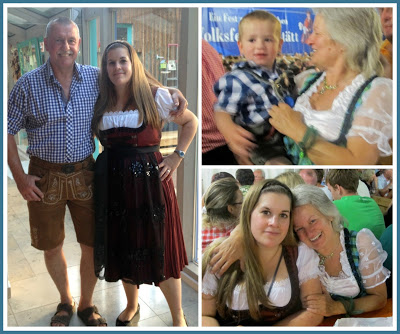 After a spot of dinner (some yummy cheese and a big pretzel Mr. C. and my Dad took Finn for a walk around the tent because he didn’t fancy sitting down anymore,….so I thought!!! Next thing I can hear the Singer of the Band announce that he want to welcome a special Guest from far away London who is a avid Fan of the Eichstätter Volksfest and he want to come up on stage to say a few words in German.
There was me still sitting with my Family and Friends at a table further away from the stage, although surprised that he went up on stage I thought he’s just being silly (coincidentally Mr. C. and me meet the singer of the headlining band earlier that day because he came to the Fair to visit a family friend).
My “Oh my God what is he up to now” moment went into confusion when my brother came up to me took my hand and told me lets go closer to the stage that we can hear him better. Running towards the stage through a full tent i just heard him say in German: “Can my girlfriend Anne-Kathrin please come up on stage because I would like to ask her something important” and then my heart started to pound and the tears started to roll….he wouldn´t would he??
Up on stage he was waiting for me (together with my dad who had Finn on his shoulders) and he carried on talking: “We now have been together for 7 years and have a wonderful son called Finn (when he pointed at him the crowed cheered) and now we are expecting another Baby in February (another loud cheer followed by a “I`am strong arm pose” from Mr. C. (did i mention he´s always trying to be funny)
Since you came into my life, you gave me endlessly Joy and Happiness. You have my hand, my heart and my soul! Will you do me the great honour and spend the rest of our life’s as my wife.” (and my tears kept on rolling)
He went down one knee got a white box with the ring out opened it and ask me:
“AK, Liebchen * Willst du marry me?” (originally he wanted to ask in english but he was too nervous so he mixed it up”) So in front of 3.000 People, my Family and Friends I shouted a loud and happy “JA”
into the Microphone.
Whilst I hugged my newly Fiancé all I could hear was the crowd cheering very loudly! 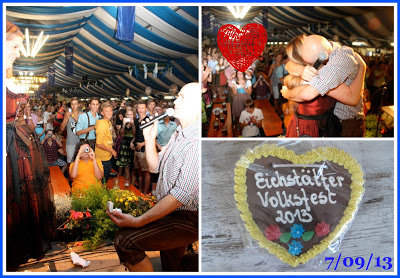 After that the Band dedicated a Bavarian love song called ” Far Far Away” to us and we had some pictures taken by a guy with a camera.
Before we left the stage the Photographer then came up to me and told me he is from the local Paper and he would like to interview us tomorrow morning for an article. (Still on cloud 9 and my legs where shacking I couldn’t do more then laugh and nod with the head). Turns out when Mr. C. told my Godfather and all his pensioned Police mates about my proposal one of them told his daughter to sent a reporter from the local newspaper to the beer festival Saturday to catch the surprise engagement.
On the way back to our table we had random teenage girls and boys coming up hugging us and high fiving Mr. C. which was hilarious.
For me this was the perfect Proposal I never could have dreamed off and although I am sure it’s not for everyone but it was very suited to us as a couple. And my family having such a long history of visiting the “Eichstätter Volksfest” I think he couldn’t have picked a better place and time to propose to me!
Thanks to my lovely Cousin & and her boyfriend we got various videos as well as beautiful before and after pictures of everybody and of course there is the newspaper article who came out the following Monday which lead to plenty of texts and Facebook messages even a shop assistant recognised me, so funny!
One very happy engaged