What an exiting day we had! 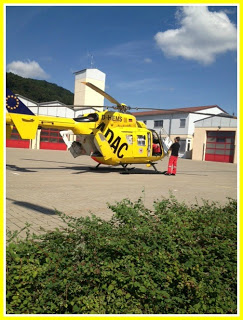 Not only are we spending the last 2 weeks surrounded by forest, near a big park with a river and ducks we also lucky that my parents live in a little village who has a helicopter pad -not in our garden though! – but close by, next to the hospital and Finn and Opa spotted his favourite Helicopter up in the sky the other day. Opa came running into the kitchen where we started to prepare lunch to ask who would like to drive to the pad to see the helicopter with Finn. So Oma and Finn went and 20 min later a beaming little boy came running towards me telling me all about the big yellow helicopter so I decided (because Oma mentioned he still hasn’t left) to take a look for myself and see if Finn and me can catch the Helicopter start again.

The last time we had a Helicopter land nearby (about a year ago) the ADAC Helicopter Pilot gave him a little book which is his favourite bedtime story with Opa right now and this time he was fortune enough to receive a poster of the same Helicopter as we saw live so off he went into the land of dreams with his new Poster above him dreaming about his adventure. 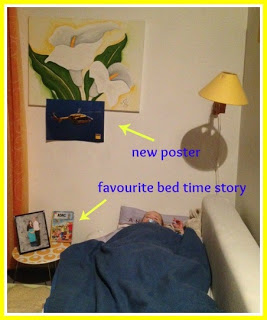 Do you have a Helicopter mad child too??
AK xx