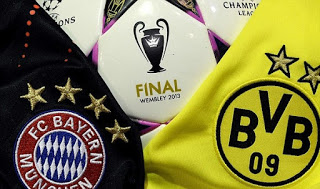 With Finn growing up bilingual we of course support
Opa´s* favourite Team: Bayern Munich. Our household is split right now 4 out of 5 People are hoping for a Bavarian win on Saturday. 5 I hear you say? Well our numbers gone up (temporarily) due to having 2 very exited Bayern Munich Fans Simon and Lukas (friends of my family) staying with us, who where lucky enough to be two of the 90.000 Football fans to bag a ticket for the UEFA Champions league final in the Wembley Stadium where Bayern Munich will play against Borussia Dortmund.
They decided to come a few days before the game and already done a bit of sightseeing in London and today they making their way to Stratford where the UEFA laid out a Champions Festival with loads of activities and skill challenges as well as the tournaments mobile museum.
But the boys are going their for one reason only, to get the opportunity for a picture alongside the Big Cup itself, certainly something to tell the grandchildren about!!

Before the Boys arrived I kitted out their guest room with the appropriate fan merchandise. After all we did wanted them to feel very welcome. 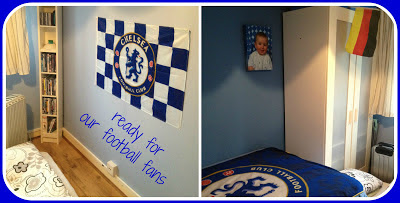 Did I mention we are supporting the blue´s too ;o)

Finn does like to show his support for both of his (equally) favourite teams as you can see here: 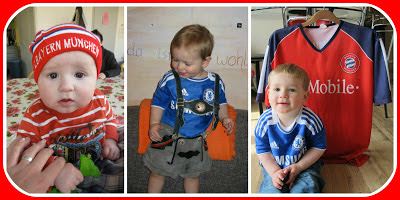 There is only one thing to say Good Luck to Bayern Munich and here is to a peaceful and fair Game of Football tomorrow. May the better Team win!!